I purchased a Standard Horizon HX890E around the time I passed my Dutch Marcom A (Marine General Operator Certificate) to have a marine radio for use on small (Scouting sailing) boats. It has ATIS for use on Dutch inland waters and DSC for use on the A1 North Sea waters. The ATIS/DSC combination in a handheld is rare. :) And since I am a HAM Radio operator, I was also interested in delving into the programming of the HX890E.

The HX890(E) is the successor to the HX870(E) and I found a collection of information about the HX870 by Arne Johannessen. I recognized lots of similarities in the structure of the DAT file, but also some differences. So I started to analyze the DAT file and the result you can read below.

I will not duplicate all the info from Arne's page on the 870. I will however point to info on that page and describe where the DAT file contents differ between the 870 and 890. I divided the info into blocks dedicated to a specific subject, like adding channels or deleting MMSI/ATIS info. I added screenshots if needed.

The Standard Horizon HX890(E) is produced by Yaesu. It is a handheld marine radio, for use on inland waters and the sea. For use on inland waters where the Basel agreement is applicable (some European countries, like Germany and the Netherlands), it features ATIS (Automatic Transmitter Identification System). For use on SOLAS A1/A2/A3/A4 waters (read: most seas) it features DSC H (simplified set of SOLAS Digital Selective Calling). The HX890E can be used in 3 regional channel modes: US, International or one of the other regions (Canada, UK, Belgium, Netherlands, Sweden, Germany, set by a specific startup key combination).

Each of the regional channel sets is different:

Modifying the memory image directly using a hex editor is likely not a supported function of the device or its accompanying software. As such, it might void your warranty or brick the radio or even put it into a state where it transmits or receives on frequencies forbidden by international Radio Regulations, local regulations (FCC / BNetzA / …) or local law. Using the radio in such a state might disrupt vital safety-of-life services. Many jurisdictions impose a fine or criminal penalty on it. You should not mess around with any of this stuff unless you know what you’re doing! This also applies to adding/deleting channels, it might be against applicable laws to use those. And, to finally state the obvious: whatever you do, I cannot be held responsible for it.

And: I do not work for Standard Horizon / Yaesu, nor do I have first-hand “inside” knowledge about any of their products. The information on this page was gathered by playing around some with HX890E radio and the YCE20 software that goes with it. Several radio users contributed information to this page; Norm Perron was particularly helpful. All info based on firmware version 2.01.

Differences and similarities in the DAT files

You can identify a DAT file for a specific product from the magic number at 0x0000: 0x0367 means it is for the 870, 0x037a means it is for the 890. The DAT file of the 890 is very similar to the one for the 870, the differences are mainly from added functionality in the 890 (extra space for RG and EXP channels as an example). So lots of info from the 870 page is still valid. This goes for the Setup 1, Setup 2, channel group names, preset groups, region selection and more. Some are at a different location, mentioned below.

Disabling DSC and changing the name for a channel group

YCE20 does not have a setting for turning off DSC for a specific channel group (it does for ATIS though), which leaves DSC enabled in the Dutch channel group. And using DSC is prohibited on inland water in the Netherlands (except for the IJsselmeer, Waddenzee and Osster- and Westerschelde on a voluntary basis). But with a Hex editor you can turn it off by setting 0x091 to 0x00, making you compliant with the law. ;) I think that for the European (E) version of the 890, Standard Horizon should make DSC configurable in YCE20, or disable it for all RAINWAT region groups by default.

You can also change the Group name here, I changed NL to NLD to show I am using the altered channel DAT file. 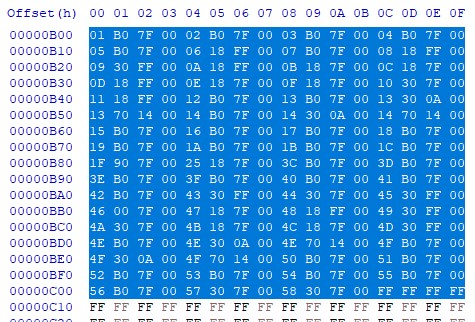 The Marine Channel Flags are found at a different file location (0x0700 versus 0x0600 for the 870), but contain mostly the same flags as described on the 870 page, but the 4th byte (0x03) now contains the Scrambler bitmask (see below) in stead of 0xFF.

This is where you can change the behavior of channels, like simplex versus duplex, high versus low power and more. One thing to note is that the 0x0080 bit listed as DSC intership is mentioned on the frequent combinations list as "ship/ship" without the DSC part. The difference between "simplex" and "ship/ship" is the possibility to send DSC (intership) messages to point to the "ship/ship" channel easily.

The default Dutch channel group has some interesting settings, which are either against the law or unpractical:

Below in the files section, you can download a DAT file (HX890E NL kanaalnamen + NL Legal config hex-edited.dat) which is edited to comply with the Dutch law (see Bijlage2 in the Regeling gebruik van frequentieruimte met meldingsplicht 2015). The changes made from the default NL channel group are:

Note: the DAT files are edited with the Dutch law in mind, but you need to make sure to comply with the law yourself. I am not liable for any errors or omissions in the DAT files. And you need to reload the DAT file after switching channel regions, the internal NL channel group is the un-edited one. 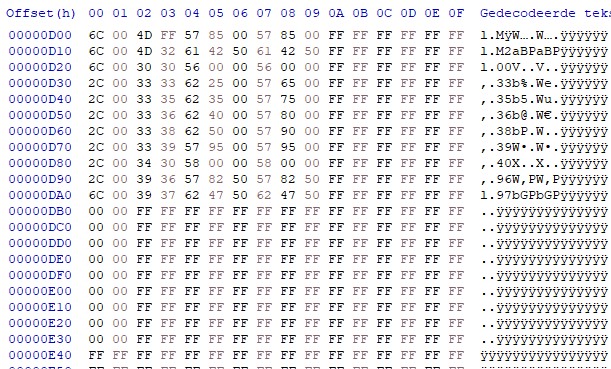 Now things get interesting! :) Some regional channel groups on the HX890E have extra channels added. The UK group has M and M2 added as RG channels, the NL group has 31 an 37 inserted in the normal channels and the Swedish group adds L1/L2/L3/F1/F2/F3. But you might need other marine channels, as an example if your company operates on another non-standard marine channel. This is where adding channels comes in. 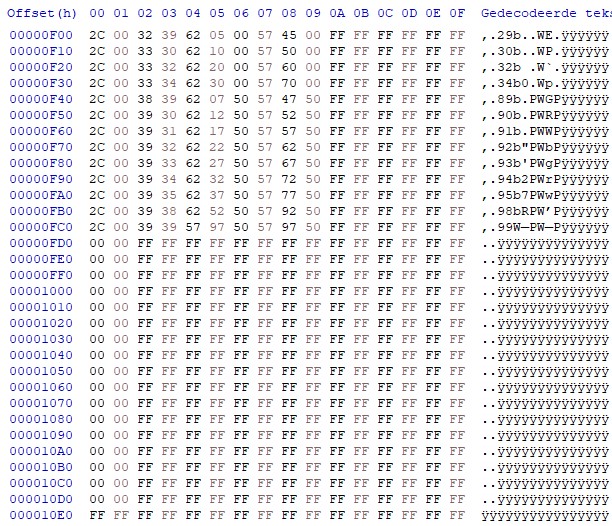 You should probably use 0x9 to default to low power for extra channels. The channel then defaults to 1W and you can power up if needed.

However, just adding the channels in the RG and EXP groups is not enough, they need enabling to show up:

You can assign channel names in YCE20, they will show up at 0x3800 for RG channels:

YCE20 is way easier to use for naming channels than a Hex editor. But naming EXP channels in YCE20 I noticed they were shifted 1 character for each channel when programming the HX890E. On the HX890E it looked like the text scrolls. I eventually used a Hex editor to name the EXP channels, which shows the names shifted in YCE20 but normally on the HX890E.

I expect the data at the beginning of Setup2 (shown above with no MMSI and ATIS code programmed) NOT to work for changing MMSI and/or ATIS, however I need to verify this. Resetting the "programmed" bytes from 0x01 to 0x00 at least makes it possible to change the ATIS code and own MMSI in YCE20, but I have not confirmed that the numbers are actually written to the HX890E. Chances are slim that it would work, since a DAT file read from a live radio does not contain the actual MMSI/ATIS and the "programmed" bytes are reset. If it would work, just writing a DAT file read from the radio directly to the radio again would reset the MMSI/ATIS values.

YCE20 sorts them alphabetically in the list, but they retain their Waypoint ID (shown at 0x0F), which starts at 0x01 for the first waypoint. That means that there can only be 255 waypoints (0xFF as the ID then), so the 250 is almost maxed out. When a waypoint is deleted, the Waypoint ID is free to be assigned for a new waypoint. If the Waypoint ID is part of a route, the route is effectively cleared. Only the name is retained and the route up to the deleted waypoint. If the waypoint was the start waypoint, that is also cleared in the route. YCE20 warns you for this with a popup.

The last 17 bytes are 0xFF padding, so maybe Standard Horizon will expand the number of via's to 63 in a future firmware version? ;)

The Transmitted Logs uses the same structure as in the 870, but starts at 0x8000. Same for the RX Other Call Logs, which now start at 0x9900. Since I have no DAT file with actual RX Distress Logs, I cannot confirm the location of those messages in the DAT file.

Interestingly, a preset with the frequency of 000.000MHz and 0x0 as 0x00 is stored at the end for each frequency that is deleted. This might be a bug in YCE20, or just a way to mark them deleted. Marking should not be needed, since unsaved presets are all 0xFF.

The DAT files can be saved by using the right mouse button and selecting "Save link as..." or similar. If you just click on it, it will probably show the (non-readable) contents in a new window.

Using DAT files from my site can be illegal in your jurisdiction, make sure to comply with all applicable laws.